Price– Free via print and play, but on kickstarter now! https://www.kickstarter.com/projects/johnwrot/adapt-the-card-and-dice-game-0

Basics-This here ocean isn’t big enough for all of us….A.D.A.P.T. is a simple card game where players all take the roles of different fish.  Every players is attempting to be the last one standing in a free-for-all.  Play starts with each player rolling on a percent table to find who goes first and what extra options the other players gain to make up for that.  Next, is the basic turns.  First players gain experience points.  Then you have five options: adapt, buy, attack, special, and wipe.  Adapt is where players place a new evolution cards on your fish over any current cards in that slot.  These cards come in several types from fins to organs, but the most important cards are body cards.  Body cards provide a hit point total as well as a body level.  Your body level  plus two is the max type of card you can place on your board, but you can only buy a body level one greater at a time.  Buy is spend experience points to get new cards.  If your body level is high enough, you can immediately place this card, but otherwise you can set this card to the side and upgrade via an adapt action.  If no cards are bought after any turn, then remove the oldest card and place a new one.  Special is use a special actions provided by your new, evolved fish cards.  Wipe is remove all three current cards, gain extra experience points, and then place three new cards.  Attacking is the meat of the game.  Each body provides a die type (four-sided die to twelve-sided die).  When you attack, you roll the die indicated by your body and add you current ferocity score and compare against the target’s survival score.  If you beat the survival score, you deal damage equal to the difference plus your lethality score.  If you match you do one damage plus your lethality score and gain two experience.  If your score is lower than the survival score of the target, you gain experience equal to the difference of the scores.  After a player takes an action and the available cards cycle, the next player takes his or her turn, and this continues until only one fish remains swimming!

Mechanics-What you read above is enough rules to open the box and start playing.  Sure there is some nitty gritty, but overall the rules are sleek and simple.  Nothing is wasted here, and everyone gets to have fun right away.  The actions you get always give you something to do, so I never felt like I was wasting a turn.  Combat is the most complicated part of the game, but it’s pretty simple.  Some abilities feel somewhat less useful like hiding.  Taking an action, you can force an opponent to roll a die to see if they can target you.  The die value starts at a 1 or higher on a d8.  I’d like some options to be a bit more viable right out of the evolution gate.  If you focus on it, it’s powerful, but nothing you could splash into a fish.  Overall, it’s a more complex Munchkin that isn’t overburdened by its own rules.  4.5/5 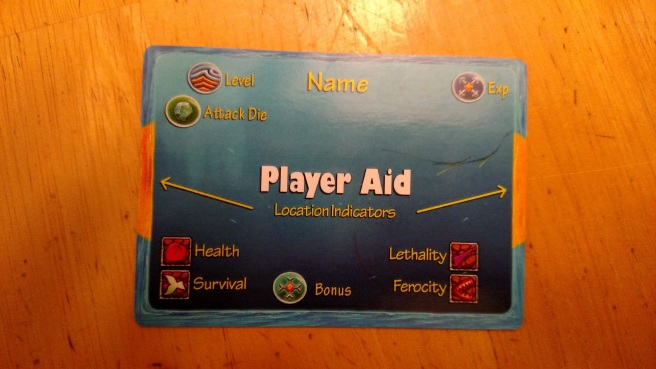 Theme-This game also feels like a more complex version of Munchkin that is all screw your neighbor card game.  The only way for me to win is for you to lose.  That theme might throw a few other players, but it also is much more inline with biology.  Only one fish gets to be the top of the food chain.  I did feel like a fish struggling up the chain, so that was a fun addition.  The evolutions feel more like Pokemon evolutions then true evolutions, but it’s fun none the less making frankenstein fish as you randomly evolve new body parts.  If you are ok with a pure combat to win a short card game, you will have a blast! 5/5 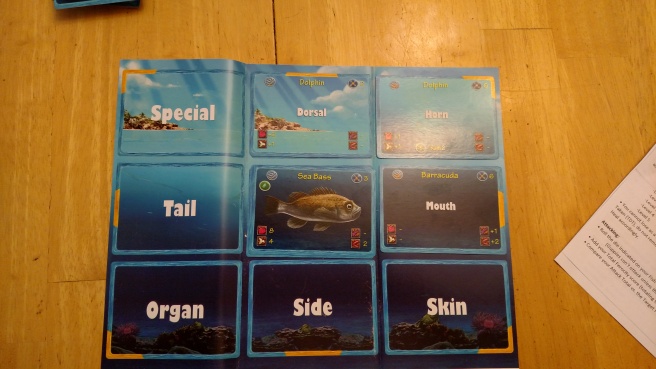 Instructions-The instruction currently are pretty simple with little art, but that’s because it’s a print and play game.  The kickstarter will have fancier rules, but currently they do the job well if a bit wordy.  It gets you playing quickly, and the currently available guide cards really help you understand how to play the game quickly.  I’d like more pictures and art for the rules, but for a kickstarter and print and play rules, this is a well done write up that will get you into the game with ease.  NOTE-i’ve spoken the the creator and the rules will indeed have more art, so makes them even better. 5/5

Execution-I was provided a kickstarter pre printing, but honestly I’ve seen a lot worse from current production games.  The cards all look great and have simple icons to tell you what they need.  The boarders tell you where they socket, and that really help you know what you’re doing.  The art is fun, and the pieces looks like the fish they come from.  The player mats all look great and again help you play the game.  The only things that are keeping this game from being out now is some of the cards only had base words on them instead of art.  But for a game that’s almost in kickstarter, the only thing slowing this down is some art and printing!  Well done!  My own problems were some of the symbols were a bit small.  The body score is listed as a number of concentric highlighted fins.  It’s a bit hard to see.  The attack die is also the same way with the die being a bit small in the circle.  If the fin level and attack die had a faint number or sided number to make things a little more readable, I’d be tickled pink.  Want to see the preproduction parts?  Check out our unboxing video here: https://youtu.be/-blQE4UB0YA  NOTE-I’ve also spoken to the publisher and the final will make the die and fins easier to read as well!  4.7 5/5

Summary-If you want a more complex Munchkin game of ocean dominance, then you can’t do better than this.  It plays in about 30 minutes for three people if you know the rules.  Nothing here feels off or breaks the game.  Some options are a bit better than others in terms of cards to take, but I never felt like I was going to lose from the cards I got.  This game does use lots of dice, but as an American style game, luck and randomness will be an important factors in your win or loss.  The theme feel spot on, but that’s an acquired taste-you will only win if you’re the last person standing, so killing the other players has to be something you’re ok with doing.  You can’t let the game do that work for you.  As a veteran of these kinds of games, that’s something I found fun in this game.  As for where the game is in terms of being ready, this game just need a bit of art and a fresh coat of paint for the rules, and it’s ready for the road.  I can’t wait to hit the water and decimate the other fishies in my sea!  It’s currently on kickstarter, so right now is a great time to hit the waves!  96%