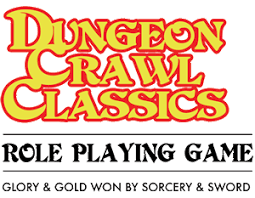 Ok, we need one more system with a can to smack an idiot!

Smack Can
Tech Level: 2 Complexity Modifier: 2
Range: 10’ radius, special
Damage: 6d10 main, 6d6 others
Special: wielder immune
Power: Self
Smack cans are highly compressed depleted uranium cans. A wielder makes a melee attack on someone instead of throwing the can. If it hits, the main target takes damage as above, but then the can explodes and hits all creatures in the area with acid-based damage except the person who swung the can.

The Good: More for future fun for the awesome DCCRPG system

The Bad: Not enough explanation of how things work

The Ugly: Why you no hyperlink?! 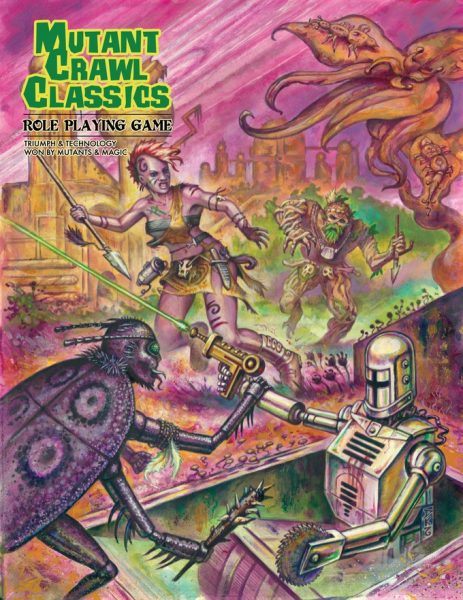 Basics-.  Let’s break this down.

Base System and Combat- Can you play Dungeon Crawl Classics?  Then you can easily play MCC.  This system uses the exact same rules, so if you love the DCC mechanics, then you’ll love the MCC rules.

Technology-A BIG part of the crazy, Appendix N mix of magic and technology is fur-skinned barbarians finding laser rifles and worshiping holograms.  This system builds off that in a big way.  Every class gets an AI interaction roll.  When you find something, the character attempts a roll to use the item.  These items vary from hyposprays to laser rifles.  And of course, this roll uses a random table to determine what happens with interaction.  Pure, awesome DCC/MCC goodness!

Magic, mutations, AI-OH MY! – DCC emphasized magic, but MCC emphasizes mutations.  Pure strain humans can choose several different classes that cover the basics: not-cleric, not-fighter, not-wizard.  They are all MCC flavored, so they are fun in their own right.  The not-wizards, called shamans, are interesting because they choose an AI who give them power.  This follows the exact same mechanics of a DCC RPG wizard and even uses the invoke patron spell to ask for power, but powers are called wetware programs.  It is sufficiently different to be MCC themed but uses the basic mechanics that DCC introduced, so anybody can easily hop in and play with a small DCCRPG background.

Non-humans fall into several classes, but ultimately are mutants.  These mutants all have random mutations that give them different powers.  The most interesting part is some are good and some are bad, of course on a random chart!  When you gain the mutation, you roll on a random chart to see how it works.  That right there makes these new mutant monsters who range from plant creatures to animal men novel, but still a familiar mechanic that any veteran of DCC can easily adjust to play.

Mechanics or Crunch-This book adds a lot of interesting things to the DCC RPG system, but some of them come out better than others.  Lots of the moving pieces from DCC RPG work, but some like the healer (the not-cleric of the future) doesn’t fare as well.  The healer can only heal twice per day and only a d3.  That means a strong return to the 5 minute adventure day.  The sentinal (not-fighter of the future) does amazing with found technology, but out of the box at level one with no toys won’t be nearly as strong.  Magic/wetware technology is good, but there isn’t much of it here as you need other books to have enough pieces to play with.  Furthermore,   the new things like mutants, plant people, and animal people all work amazingly well and are random as all get out.  Overall, mutants are amazing, but pure strain humans might not fare as well in this new version of DCCRPG.  4.25/5

Theme or Fluff– Theme is the best part of this book.  Everything fits into the lore of the book.  The new classes, the new creatures, and everything else feels exactly like it should.  Hands down my favorite part of what’s here. 5/5

Execution–  Here is where I am the least excited.  Overall the book works, but it’s missing things that would really help it.  There are very few spells/wetware programs.  It’s not horrible;  the book says wetware programs are spells and you can easily use DCCRPG spells, but I want more.  The new mutations are great, and I really love that part.  But, the straight human classes do not get enough of a write-up.  Each class gets half a page, and it’s not enough to fully explain their powers and abilities.  Also, the PDF isn’t hyperlinked.  The MCC system and core rule book works, but you can’t really play this system with just this book alone.  Think of this book more of a supplement book to the DCCRPG core book.   3.5/5

Summary–  This is a book that I alternately love and don’t like.  The theme of the book is on point.  It feels like a post-apocalyptic hellscape with barbarians and laser rifles.  The new mutations and mutants are awesome and fit right into the theme here.  Where things fall apart is how regular humans fall into line.  I would love to run a mutant in a regular DCCRPG game.  I won’t want to play a healer in a DCCRPG game.  Clerics are much better than healers.  Rogues are much better than rovers.  Also the book’s execution falls short here.  I need more information to properly run some of the characters, and I have more fingers and toes than the number of spells in this book.  This is a great splat book, but doesn’t live up to its billing as a stand alone/core book.  Don’t mistake my negative comments as hate for this book.  I love what’s here, but I feel it needs just a bit more to help new players get into this one.  85%