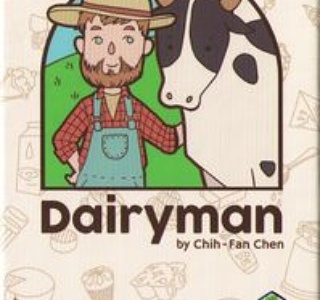 See our unboxing, learn to play , and our review of Dairyman by Tasty Minstrel Games!

It’s election day.  How about a board game of political maneuvering?

TL; DR– Influence might be you favorite addition to gaming too! 93%

Basics- Want to be mayor?  In City Hall, each player is striving to win enough public support to become mayor of New York.  To do that, players try to our maneuver or out influence each other through action selection and territory control.  Each round, players take turns placing a meeple on one of seven offices in the town: tax assessor, surveyor, campaign manager, lobbyist, zoning board, deputy mayor, and health commissioner.  The tax assessor position provides money based on the locations owned on the board and current population score.  The surveyor allows a player to buy new positions on the board.  The campaign manager increases your approval rating.  The lobbyist gets the player more lobbying cards (more on that later).  The zoning board allows a player to build on places that the players owns on the board.  The deputy mayor changes the order of players.  And, the health commissioner grants players population based on the number of stars the player has on the board with the player with the most getting 4 population while all other players get slightly less population.  What makes this action selection game stand out are the influence cards.  When you choose an office, you bid a number of influence cards.  Every other player in turn order can increase that bid, bid the same, or not bid at all.  When it gets back to you, you get to either pay the highest bid to the bank or take influence cards from the highest bidding player and they take your action with that office instead.  The game is also a territory control game.  When you use the zoning board to build on a location you own, you choose one of four different buildings from your hand that range from factory, park, tower, and housing.  Factories are worth $7 when you are the tax assessor, but only one star.  Housing is worth a maximum of five stars, but has no tax value.  Towers are a combination of the two with one tower being a max of three stars and $3 for tax.  In addition, you can build parks which are worth no taxes and no stars.  All buildings are worth nothing by themselves, but gain and lose stars depending on what buildings are adjacent. (Location, Location, Location!)  Towers, housing, and parks always increase stars, but factories decrease the values of nearby housing.  Thus, you have to carefully plan and capitalize on situations so you can have the most stars.  Stars help you when you take the health commissioner action.  Each player counts their total stars on all building with the player who got the commissioner action either adding three to their score or doubling their score.  The player with the most stars then moves up the population tracker by four, the next by two, and the third place player getting 1.  Each time a player selects the zoning board in addition to the action of gaining building cards and building on a location, a token moves up the approval rating, and when either that token or a player’s token gets to five approval, the game is over.  Players multiply their population total by their approval rating for their points.  Additional points are given out for most parks, most influence, and other factors at the end of the game, and the player with the most points wins the election and is now mayor.

Mechanics-This is a fun one.  I’ve seen the combination of action selection and territory control before, but the addition of the influence cards really knocks this game out of the park.  The different actions are simple and quick so the game moves at a good clip.  Also, the game has a built in end.  You only get so many moves to build, and letting your opponents have any of those moves could be devastating.  When you steal an action with influence is such an important part of this game, and in my opinion, influence is the most fun part of this game.  Honestly, this might be my favorite game from Tasty Minstrel Games for the influence mechanic alone.   5/5

Theme-This game feels like political maneuvering, but it doesn’t feel like an election.  Influence and stealing turns feels like politicians fighting over what gets to make what happen.  It’s an amazing game in that respect.  However, I didn’t feel like I was running for an election instead of just maneuvering to get people to move to my places across town.  It felt more like I was running a chain of hotels and businesses than a true mayoral race. 4/5

Instructions-These instructions are done pretty well. The rules by themselves teach how to play well.  I was left with a few questions such as are your cards secret?  These were minor questions however.  Also, I would have liked a few more pictures in the rules, but overall the rules were clear and easy to read. 4.5/5

Execution– I like the way the game is produced.  I would have like bigger cards, but the card size keeps the total game size down.  The board is easy to read, and each player gets a player board to help them understand what each position does.  That really helps speed play up.  However, I have a major problem with this game.  There are not nearly enough stars!  The game comes with a single sheet of punch out stars.   That is about half of what you need for a good sized game.  I know I am not the only one who has had that problem.  4.5/5

Summary– This game might have one of my favorite new mechanics.  I’ve seen action selection before.  I’ve seen area control/management before.  What I haven’t seen is action bidding/stealing before.  That’s a small change that really adds a ton to this game.  This game isn’t perfect as some small problems in the execution, instructions, and theme hurt this game a bit.  But, what is here is a quick, excellent board game with lots of political maneuvering that I want to get to the table as soon as I can again. 93%