TL; DR– Ankmir is a fun playground, but this book isn’t full of player options. 85% 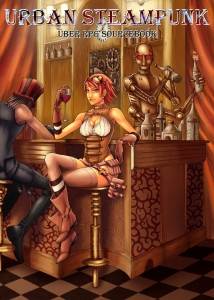 Basics-You can’t have steampunk if you don’t have a Victorian city full of machines!  This book provides a perfect city of steam Ankmir to play in/destroy while giving GM’s the options to build their own world.

Theme or Fluff-Much like the other setting books by Uber Goober, this book does a great job of building three different worlds in the same city.  Uber Goober sets up a world of steam tech, a world full of rebels, and a world for magic all in the same city.  Whatever game you want to play, Uber’s sets up the world and gives good background for a great setting to start your own game. 5/5

Mechanics or Crunch– And here is where the book suffers.  Just like Steampunk Uncharted, this book isn’t a splat book for characters.  There are few mechanics discussed here, but don’t get this book if you just want more player options.  There is a great deal of information regarding all the different important population information a player could want if you want to get super crunchy in your story.  It’s a story book, but that aspect is done well. 3.5/5

Execution-This book could use some more pictures to distract from the walls of text.  But the book does have lots of maps, so that helps.  There is textbook problem here as many pages are just two columns of black text on a white background.  That doesn’t draw the reader, but what is here is set up as best as it could be giving the amount of art that is in this one.  Each area gets a description, how to play in the three types of steampunk, story seeds, and persons of interest in the area.  4.25/5

Summary– As with Steampunk Uncharted, if this book and the core Uber RPG: Steampunk book were put together, they would add up to one amazing book.  Uber RPG: Steampunk introduced the city of Ankmir, but this book expands on the main city presented there.  Ankmir is a fun playground to run around in, but if you only want new stuff for your characters, you might want to look at the other books by Uber Goober. 85%