Product–Seekers of A Hidden Light (Shadows of Malice Expansion)

Basics-Need more from your Shadows of Malice game?  This is the expansion for you!  This game doesn’t fundamentally change the nature of the game, but it does add new options.  Mystics get two new important abilities: quests and lures.  Quests require an avatar to enter an area to either get one resource (via a luck roll), kill a particular monster type, or do both at the same time.  When a quest is completed, the players get to return the quest for new potions, soulstones, and lux.  Lux can be spent to buy super powerful potions or new runes which are engraved on weapons increasing their power.  Lures are new ways to cause monsters to fight your character instead of having to fight in lairs.  These lures provide a luck bonus to the roll to determine the monster encountered as well. 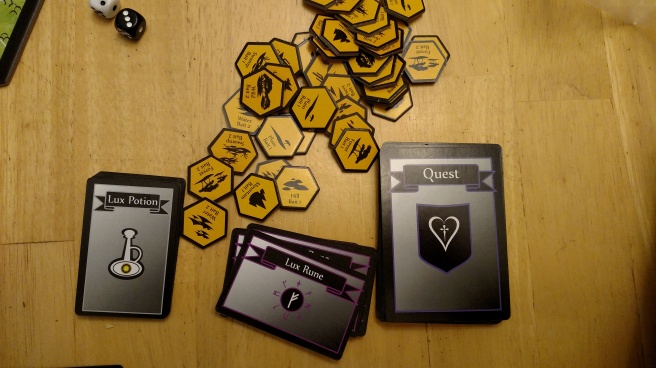 Mechanics-What you read above is pretty much what’s in the box, and that’s not bad.  This expansion isn’t here to completely change the nature of the game, but it does bring some fun extra parts to it.  Fighting monsters in lairs can be tough, but lures provide a way to fight monsters with much less power.  The new quests are a fun addition as well.  You can only have one at a time, but they do provide you with some goals and will cause players to go off and look for specific fights.  Overall, it’s an added layer onto the game that you’re used to playing.  It’s not overly risky in terms of expansion to the game, but it’s also something that fits well into the game  4.5/5 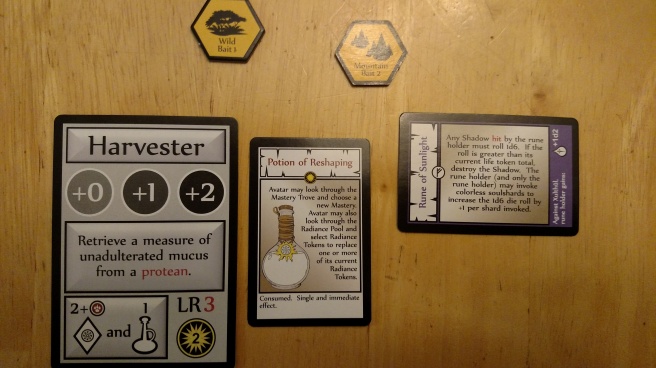 Theme-This game has some great theme, but some interesting choices as well.  The new lux mechanic is worked well into the story.  Now players are given quests by mystics who also extract lux from the objects they desire.  That works well and builds the world around it.  Players get some awesome stories from hunting monsters to find light in the world.  But, players also get some weird moments as now not only do mystics heal you, send you on quests, but they also operate the bait shops of the world.  Players get lures from mystics as well as from monsters themselves.  That’s a little bit off as I would think the towns would have the bait shops.  It’s only a small misstep though as the expansion adds on the the game in fun ways. 4.5/5

Instructions-This expansion shows some growth from the base game.  This book reads much better and really helps players to add the new elements quickly to their game.  Players also get an appendix to help them find where each topic is discussed.  The rules are still a bit too wordy, but they don’t take long to read. It does plug quickly into the game and won’t take long or be hard to figure out when you do so.  4.5/5

Execution– If the base game is like Arkham Horror, then this expansion is a small box expansion like The King in Yellow.  This box has new full cards, new half cards, and tokens.  Compared to Fantasy Flight Games, it’s fairly priced.  I do like all the pieces that come in this box.  Heck, the box itself is well put together as it’s made with solid cardboard.  I’ve even made an unboxing video which you can view here https://youtu.be/Wiku-FDMmvQ    4.5/5

Summary-This expansion is a fun addition to the Shadows of Malice world.  Now players can undertake epic quests to gain the power of light while building up their own abilities, use bait to lure monsters out of hiding, and use the power of light itself to gain epic upgrades.  The expansions doesn’t bring anything out of place in the game world.  However, this expansion doesn’t tack on much to the game beyond what was already working here.  If you don’t like the base game, this expansion won’t do much to sway your opinion.  However, if you are looking for a solid expansion to your Shadows of Malice games, then this is a great way to build more replay into your Shadows of Malice game. 90%