Basics-  UNDER THE SEA!  Octodice is spiritual successor of Aquanauts, a game where players battle octopods, research, and develop an undersea lab in a heavy euro game.  In Octodice, players do all the same, but using dice to dictate the actions.  At the start of a player’s turn, the player rolls six dice, chooses two to keep, then rerolls the rest, chooses two to keep, and rerolls the last two.  These dice are divided into two groups-black and white.  Black dice have a colored number on them or an octopod.  The white dice have an action or an octopod.  The active player then chooses two pairs of dice (each pair consisting of one black and one white die). The final pairs being used do not have to match the pairs made when rolling the dice. The player then uses the action on one and the color/number on the other.  The actions are: collect gems (collect points based on the number on the black die), research (get points in order by moving down a color path using the proper color and the action die on each step), develop (improve your lab and get new dice options or end game points), get robots (earn points now, two robots per each color), and get subs (put the robots in the sub and earn points after every other round).

After a player chooses his/her two dice pairs, every other player can also choose to use two of the dice in any combination, not necessarily the same combination as the current player.  Players can do this twice per round.  Finally after choosing dice, the player looks for octopods. The octopods destroy the station and gum up the works.  If a player does not have two octopods on his/her dice by the end of that round, that player loses two points.  However, if the player has two or more octopods in the dice pool, then they score extra points!

Play then moves to the next player.  After everyone has two turns, players check to see if they knock out two or more octopods in the round and score points for each robot in the same colored sub.  After players play a total of three rounds, having a scoring phase after each two turns, the player with the most and second most gems earns more points, players with extra developed labs score points, and the player with the most points is the best aquanaut and is the winner! 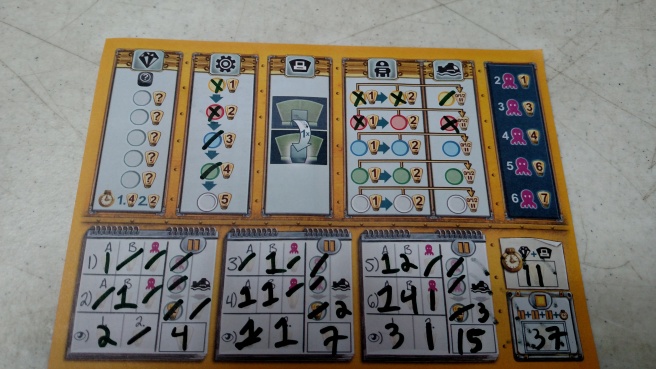 Mechanics–  I hate Yahtzee.  It feels like I don’t get a choice, my decisions don’t matter, and I just have to be bored while other players roll dice.  This game has none of those problems!  Sure, randomness is a part here, but the amount of options I have at all times makes me really enjoy this game.  I’m seeing more and more games where the players have things to do off turn. Instead of spacing out on Pokemon GO, the other players get to see what I’ve done and still remain engaged with the game since they are looking for dice pairs to use.  I get my euro, but there is still enough random to keep it fun.  5/5

Theme- This game is fun, but I don’t really feel like an undersea researcher.  Most of the time, I never do the research option.  I develop my lab most often and then send out robots and subs to make points.  It feels like a slight disconnect between a game of sea scientists and what I do. 4/5

Instructions-If you understood the rules above, then all you need to play is to understand the rules for developing your lab.  Beyond that, this is a game you learn in about one minute, then play in 15.  The rules have enough to cover what they need to cover, and they don’t overstay their welcome.  5/5

Execution– I made an unboxing video of this game where you can see all the pieces at https://youtu.be/9gaHRrZs-qY.  What’s in the game box is great.  The pieces and the game footprint are small, but all well made and work for the game.  Heck, on my anniversary my wife and I played this at our table in a fancy restaurant!  The dice are nicely colored wood instead of plastic.  I *might* like rewritable tablets as I might run out of game pads for scoring, but I know the PDF is online.  Also, I would like pencils in the box!  Much like other dice games, I hate when I have to scrounge up a writing device.  But, my small gripes aside, this game is well put together.  4.75/5

Summary-I said above I hate Yahtzee, but this game is an amazing combination of Yahtzee and a euro.  AND I LOVE IT!  You get the fast pace of its American parent, the interaction of a great dice game, and the deep thinking of a euro.  Sure, you can’t expect the depth of a much longer game, but what you get is a great experience.  You can learn it quick from the rules and teach it even quicker to your friends.  The theme might be off and I want some golf pencils with AEG’s logo on them, but those are only minor complaints to how much fun I have had.  If you need a good gift for under $20 or you want a great pub game then this is the game you are looking for.  94%