TL; DR-Not perfect but amazing none the less.90% 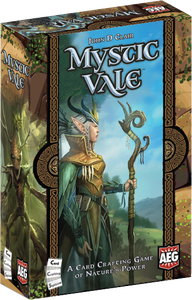 Basics-  Only you can save the vales!  In Mystic Vale each player takes the role of different druid clans attempting to restore the world after a magic calamity.  Each player has a deck of sleeved cards.  At the start of each of a player’s turns, he or she reveals cards until three spoils symbols are revealed.  The last card with a spoils symbol is placed on top of the player’s deck of cards and is “on-deck.”  Players can also push their luck and harvest their on-deck card.  If they do, they can continue to reveal new cards on-deck, and place them in their field.  If they do, they may get extra points, but if they reveal another spoil symbol, then their turn is over.  This game has a built in bonus for when a player does this however.  A player has a token that if they spoil, they get to turn this token over and it allows them to use it as an extra mana, or purchasing power, in a future turn. The on-deck card is not part of a player’s “field” or cards a player can use to buy cards or gain points. 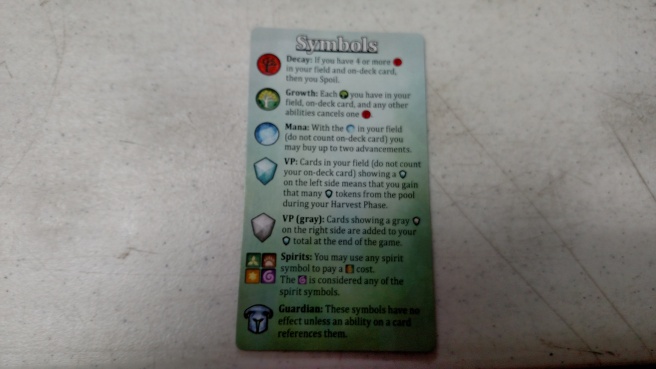 Here is where the game gets interesting.  Each card has a number of symbols on it.  These symbols are mana (money for extra card pieces), victory points, growth to counter spoils, and spirits (a second currency to buy vales or permanent cards).  If a player doesn’t spoil, that player gains victory points, and then can spend mana to buy card inserts or spirits to buy vales.  A player can buy two of each, each turn.  Vales are placed in front of a player and provide a constant benefit and inserts are inserted into cards in a player’s field.  Here is the major strategy of the game.  A player doesn’t build as many intercard combos, but instead crafts intracard combos as new inserts unlock new abilities based on the symbols on the card.  Additional symbols called guardians provide benefits only if a card has an ability that triggers off guardian symbols. 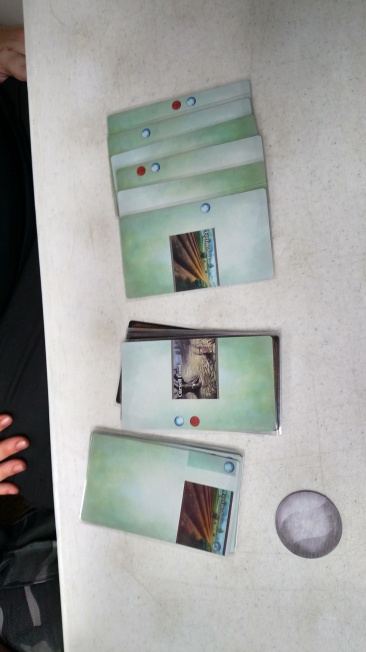 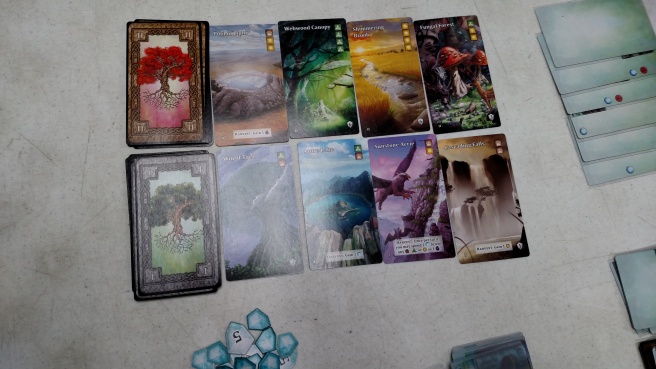 Mechanics-The card crafting mechanic of the game makes this an amazing game.  I had a blast building different card combos.  In addition, the nature of building your field means you can build off turn and have almost no down time.  I’ve seen games take as little as 20 minutes when four experienced players hit the table.  I also love any game that has two different markets.  I get bored when the victory strategy is build the biggest card to win, and this game doesn’t have that at all.  The drawbacks of the game are player interactivity and a runaway victory.  I am basically running a race against myself. Other other players steal cards from you, but only from the buying pool.  I really don’t need the other people at the table.  Furthermore, if someone has the best card inserts due to the available cards, then that person will win.  There is strategy, but if they play better, they will win and nothing you do will stop them.  You can only just be better at the start and not fall behind.  It’s not a bad game, but know that going in! 4.25/5

Theme- Mystic Vale has a ton of theme, but it is a theme you must find yourself.  The game can be simply played as deck builder with a new mechanic of building cards instead of decks, and this will not detract from the game at all.  However, if you are like me, you really want to have a massive amount of story to your game.  It’s here, but you need to dig for it.  From the terms like field being where you harvest your mana to the idea of spirits revitalizing the mystic vales, you get a story as you play.  But, that means theme is not front and center. 4/5 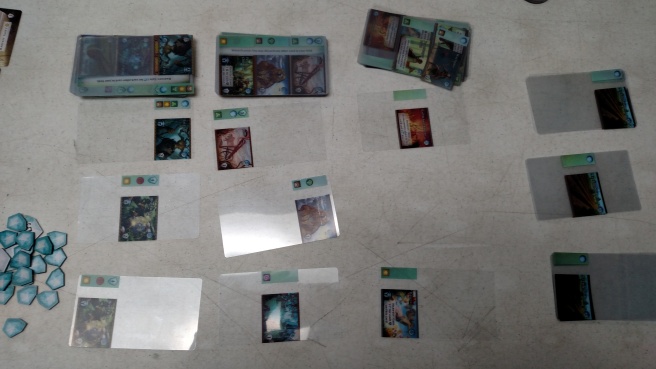 Instructions-This is an awesome game that teaches quick, plays fast, and masters instantly.  You don’t feel stupid stepping up to this game as you get a quick intro with enough introduction to get you gaming quickly.  By the end of turn two you have the game down pat.  Also the helper cards are amazing!  They really do get you gaming faster. 5/5

Execution-I love everything in this box, but the game’s execution suffers from its main mechanic.  The art is amazing.  The cards are good quality.  The box has beautiful dividers.  This game is almost everything I want to see in a deck builder.  But, every card has three sections.  Since you want to have the new cards inserts work in each spot, you have to divide the card insert pool by one-third.  That means the game can grow a bit stale semi quickly.  Luckily two expansions have been announced already.  It’s a minor problem, but it’s one worth mentioning.  If you want to see a full unboxing check out our video here https://youtu.be/cPVRTU2h5bk 4.75/5

Summary-Mystic Vale is one of my new favorite games.  It’s fun to get to the table. It’s phenomenally fast to learn and play.  It’s gorgeous, and it’s fun to insert cards into sleeves and unlock their power.  That said, it’s not without it’s faults.  The game doesn’t fix common deck building problems.  The theme isn’t as strong as I’d like, and you might get tired of seeing the same card after 10 plus plays.  But if you play a game over 10 times, then the game is a win as it keeps you coming back for more.  It does for me.  Despite the faults, I’d recommend this over many other deck builders out there.  90%

You respond to a creature being subject to a critical attack, and surround the target in impenetrable force.  The target of the spell gains +20 to its AC for the confirmation of a critical attack against the target.  After the attempt to confirm the critical strike, the subject no longer has the benefit of this spell.

I was thinking shield save you form a strike, but what about a spell that saves you from a crit?

An field of magic force stops a strike from decimating a target, but merely causes the target to be pummeled.  When you cast this spell, a target in range is no longer subject to a critical hit, but is struck as normal with an attack or spell.  This will only affect one strike even if the target is struck with multiple critical hits in a round.

I have lots of Druids in my games.  Let’s give them something to drool over!

Fetish of the Beast

This wooden idol is carved into the shape of a merged bear, eagle, and squid.  It it covered in wrapped fur, scales, and a few feathers.  When a creature changes shape while holding this object, the new shape of the creature gains a bonus on attack rolls equal to the bonus on the idol.  This object has no effect on the default shape of the creature.

Most rogues are sneaky fellows who walk the dark paths and hide in the shadows.  You are not the person.  You favor strength over speed . You follow a member of an old court of knights.  Your mentor Jack the Giant Slayer used deception, large axes, and magic items to fell any foe fool enough cross your path.

The original Jack the Giant Slayer fell a beanstalk with an ax.  You’ve trained to follow in his foot steps.  Starting at 3rd level, you can make sneak attack with non-finesse weapons.  In addition, you can now wield non-light weapons off-hand.  Two-handed weapons must still be wielded two-handed.

Jack climbed a beanstalk, and you know how to do the same.  You climb at the same rate you  walk on the ground, unless you posses a faster climbing spread already.

In addition, you gain advantage on all Strength(athletics) checks.

Jack lied to giants to the point they killed themselves, and starting at 9th level, you gain advantage on a Charisma(Deception) checks.

Gift of the Round Table

Jack beat the devil at his own game, and he was awarded a magic sword, a cap of knowledge, a cloak of invisibility, and the shoes of swiftness.  When you become 13th level, you are award a gift of your choosing from the round table.  You must choose between a +1 weapon, a cloak of displacement, headband of intellect, or boots of speed.  When chosen, this choice can never be undone

When you reach 17th level, you may not be the Jack of old, but you are the Jack of now!  As a bonus action you can make a Charisma(Deception) check against another creature.  If that creature fails, you gain advantage on your next attack roll against the creature.

You cause the ground to instantly quintuple the gravity of a point in range.  Each creature in a 20-foot-radius of the point must make a Strength saving throw. A target takes 5d6 magic bludgeoning damage on a failed save and is knocked prone, or half as much damage and avoid being knocked prone on a successful one.  Creatures that are large or larger make this save with disadvantage.

At Higher Levels: When you cast this spell using a spell slot of 4th level or higher, the damage increases by 1d6 for each slot level above 3rd.

You cause a large force to throw two targets into one another.  Choose two targets within range to make separate Strength saving throws.  On a failure, the target is throw up to the range of the spell.  If the target is throw into another target that also failed a saving throw, the recipient and and the target take magical bludgeoning damage as shown below based on their respective sizes.  As an example, if a large creature is thrown into a medium creature, both creatures take 2d6+2d8 magic bludgeoning damage.  The thrown creatures ends prone.  If no two targets fail their saving throws, then any who did may be moved up to the spell’s range and take damage as below as they are thrown to the ground.

At Higher Levels: When you cast this spell using a spell slot of 2rd level or higher, increase the number of targets of the spell by 1 for each slot level above 2nd.

I wrote this for my rogue archetype for my stuff against the Giants, but it doesn’t quite fit…but it’s still fun, so here you go!

Jack!History repeats itself. Some men steal fire from the gods while others…steal geese from the giants. You are the modern day thief who takes from the haves and gives to the havenots (mostly yourself). It just turns out that the haves tend to stand over 10 feet tall and really want to kill you. You best be quick to keep from ending up on the wrong side of some fe fi fo fum!

When you choose this archetype at 3rd level, you gain advantage on all Dexterity(sleight of hand) checks.

Starting at 3rd level, when you take the bonus action granted by your Cunning Action to make a dash action, double your movement again.
Jack Jump over the Candlestick!

Starting at 9th level, you have advantage on a Strength(athletics) and Dexterity (acrobatics) checks.

By 13th level, you’ve left the candle burning and have earned your speed. You no longer provoke attacks from leaving an engagement and don’t have disadvantage on ranged attacks in melee.