Product-Ophidian 2360: Survival of the Fittest 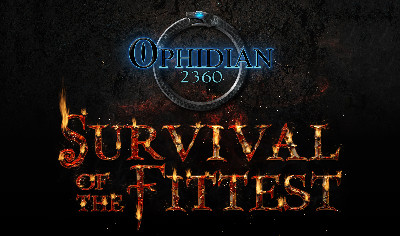 Basics-  WE WHO ARE ABOUT TO DIE SALUTE YOU!  In Ophidian 2360, you take a the role of a team of gladiators fighting another player’s team.  After setup where players get energy to buy cards and then draw a few cards and put some on the bottom of their deck, one player starts with momentum.  Momentum is the best new addition to card games from this game.  When you have momentum, you can keep taking actions as long as you don’t lose it!  This means that if you want to have all your characters attack, an action that has positive momentum, you can.  In addition to attacks, players can move character between the rows of combat.  Moving forward is positive momentum, and back is negative. Players can also play cards from their hand or activate abilities on cards.  Both cards and abilities have positive and negative momentum.  Cards and abilities have requirements to play like other games such as having enough energy to pay for the card and having the right kind of characters in play.  Some cards provide permanent bonus and penalties, some are new support characters, and some are one time events.

This is the fighting game, so combat is the main focus.  When you declare a character to attack, you choose what gladiator you will attack.  Both you and the defender may play cards that are responses, quick cards that do not change momentum.  After that, the defender can choose to just take the hit or have another character take the hit for the target.  If the hit goes to the original target, that attacking player gains one Cheer.  Cheer are victory points.  If another target intercepts the attack, the defender gains cheer.  Damage is quick as well.  The attacker has a damage value, the defender has a defence value, and the damage done is the difference of the two, minimum zero.  There are effects and abilities that do direct damage that is not reduced.  When a character attacks, it exhausts, and exhausted characters can’t attack again until the breather.  Attacking is an action that keeps momentum, but if a player spends Cheer, then the attacker gives up momentum and another player starts their actions.

This stand alone expansion of the game introduces Rage.  Rage is a hit point value that when crossed, causes a character to do damage to attackers for free after defending.  This changes the game midgame as now you have character who start to kill your attacking if you are not careful!

The last action a player can do is pass.  This gives up momentum, and when all players pass, they enter a breather.  In a breather, you figure out who goes first next round (person with the most wounds on their characters), pay costs for things in play, unexhaust all their cards, gain back their energy, move characters around, and promote one character.  Promoting is the second most novel aspect of this game.  Character cards are double sided and not random.  When you promote a character you basically level them up.  They might do more damage, increase stats, or gain new abilities.  The most important fact is their disciplines increase.  You can think of disciplines as factions with levels in them.  All cards you play have a needed discipline requirements.  You don’t spend discipline as a resource, but if your character with the warrior level 3 discipline dies, you can’t play cards that requires warrior level 3 until you have another character with that discipline that high.  Discipline requirements can change the battle in an instant as your entire hand might go from amazing to useless if the enemy kills the right character at the wrong time!

The game continues in this way until one of four things happen.  You can win by killing all your opponents gladiators, reaching 15 Cheer, or ending the fourth round with the most points.  If you’d like to read the full rules, check them out here: http://hackandslashgames.com/wp-content/uploads/2016/03/OPHIDIAN-2360-RULES-SUMMARY.pdf  May the best team win! 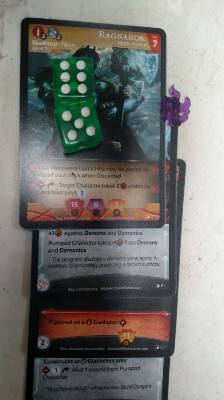 Mechanics-This is truly the  high point of this game.  The novel idea of doing almost as much as you want in a card game really draws you in.  It could go really bad as this might make the game spin out of control quickly, but the ability to spend Cheer to stop the momentum of combat easily balances this problem.  If you’re tired of the old Magic basic flow of combat, this game adds a new mix to fighting that is fresh.  This pack also adds rage.  This changes the battle dynamic as now you might have to think through your options before fighting people who can damage your own characters!  5/5

Theme-And here is the low point of the game.  This isn’t bad, but I want more in this box.  I feel like I’m fighting in an arena, which is good, but I don’t know why my characters are here.  I don’t know why there are wizards and a lady who has a lazer gun together in the same place.  There are only a few characters in the box, but I want to know more about who they are.   I like what’s here, but I just want a lot more!  3.5/5

Instructions-Instructions to this game are about as bad Magic rules.  They work, but you will have to look up a ton of clarifications on how to play if you only have the box itself to go on.  Overall, it’s not horrible, but even the developer is working on a more comprehensive set of rules to the game.  If you read up at other sources, you will do fine.  I don’t like when I have to look elsewhere to play a game!  3.75/5

Execution–  What’s here is great.  The cards are nice quality, the tokens are good, and the pictures are nice.  I’d like the icons to be larger.  That’s my main complaint.  I‘m getting old and reading what level you need for each symbol can be a bit small.  Same goes for some of the text.  But, that’s a pretty small complaint compared to the awesome in this gamebox.  Bonus-This game’s price point is amazing.  That alone makes it worth a look.  4.75/5 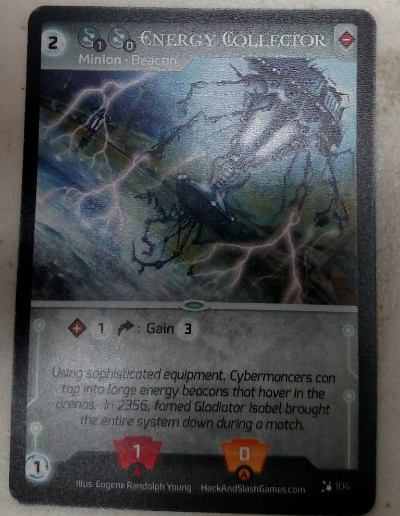 Summary-I like this game, and feel badly about giving this game the score it’s getting.  The game itself is great.  It plays well and you do feel like you’re fighting for the crowd’s favor.  The stuff in the box is good.  I just want more.  I don’t know why I’m fighting.  I have to work hard to figure out if I’m playing this one correctly.  That’s the stuff that hurts this game.  This game needs a bit more before you play and get involved.  I want more rules and story to help me understand the world and rules of combat.  Once you’re in though, you’re in.  If you are not as obsessed as I am with story  and you get past your first jittery game, this game is a fabulous fighting game with great execution.  85%