Producer– Wizards of the Coast 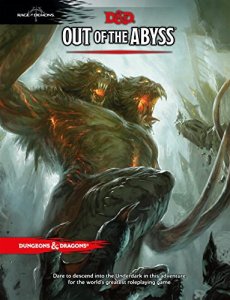 Basics-It’s going to be a bad day when the players find themselves prisoners of the Drow, and that’s the high point!  The players find themselves at the tender mercies of the drow, and eventually undercover that the underdark just became an even deadlier place as demon lords now roam the caverns.  Will you be able to save Faerûn and yourselves from the creatures Out of the Abyss?

Mechanics or Crunch-What is here is a bit of a mix.  DnD 5e has a bit of a problem serving two masters: 1e sensibilities of life doesn’t come always in achievable pieces all the time and 3.5’s challenge rating so the players survive setup.  Some of those parts crash into the PCs early on, and that can make a DM have to dance a bit to avoid a TPK.  That said, overall, it’s a well designed adventure with lots of fun new mechanics, great exploration and team management options, and some fun fights to keep the PCs on their toes and enjoying things.  The struggle is a bit real, but a good DM will be able to keep the game going. 4.5/5

Theme or Fluff-This is an amazing adventure for it’s story, but almost eight levels until you hit the main story stride is a bit much.  I’m not spoiling anything when I say that demon lords prowl the underdark.  However, you don’t really get to deal with them until you are about halfway to the max level of the campaign.  Then, this adventure turns into a classic Bioware game.  Players then find out about a plan to fix things, chase down items in any order across several different set piece locations, put out underground fires, and save the day.  That part is amazing!  Getting there is a bit boring.  But, every group of players I’ve run this game with have found their most favorite NPC of all time in this adventure, so it has some phenomenal high points along the way. 4.25/5

Execution-I like what’s here, but there are many pages with walls of text.  The art that is here is amazing, but I want/need more of it.  The text is written well, but there is so much it’s not as much fun to read, since this isn’t just a fantasy novel, but a gazetteer and a bunch of stat blocks as well.  Overall, it’s good, but not my most favorite RPG adventure layout. 4.5/5

Summary-I like what’s here, but it needs a bit of work to really be a knock out.  The starter town is a good example of the amazing and the problematic.  It has a great description, introduces some amazing adversaries, and provides a place for the PCs to cut (some of) their teeth.  However, it’s also got some fights that a DM will absolutely have to pull their punches on to keep the adventure going.  After the players escape, the chase rules are good, but the players will most likely end up doing the same fight again in a few days regardless of their choices.  That one area kind of give some of the amazing and off putting that define this adventure.  It’s close to being the greatest things a player and GM will get to play, but has a few rough spots that keep it from a smooth performance.  88%