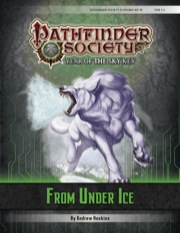 Basics-Chase a skykey under the ice of Irrisen!  The Pathfinder Society is looking for traces of a Dwarven city that disappeared many years ago.  Can you find where the dwarves went or will you anger either the Linnworm Kings or the Witches?

Mechanics or Crunch– This is a many angled mod that can be done in a straight forward way.  Like most of the mods, there is a counter mechanics for determining how well the PC’s succeed on their job or secondary tasks.  It’s not hard, but the mod isn’t so much about crunch, but how well the players think.  It’s well done and fun when you see the players analyze and understand a situation.  If the players are smart, canny, and show the proper deference, they will go through almost the entire mod without swinging their swords!  That shows the mod is awesomely stretchable, but some players, the kick-in-the-door-and-eat-some-goblins players, will be vary bored if things are going well. 4.5/5

Theme or Fluff- This is where the mod truly shines.  Sure, it’s got the necessary fights and counters that all good mods need, but how the players go about this mod really makes the story.  Are you simply smash and grab Pathfinders or are you social dilatants?  Do you understand your mission or are you simple out there to kill a bunch of people?  As a GM, watching that play out is a great roleplaying experience 5/5

Execution– Season six is the absolute best season for how these mods are put together.  Need the maps?  Here, we have blank maps for you to resize and print.  Need monster stats?  Here in the back of the mod are all the monster stats, so you don’t have to have 10 books open to run the game.  It’s still four bucks, but right now four bucks for ~ 30 pages seems to be the norm for most companies. Well done!  5/5

Summary– First, the elephant in the room-If you play this mod smart, you will not have many combats.  And, that’s what the success condition hinges on.  That right there will turn some players away.  You can’t make everybody happy, but in a mod that’s mostly going across borders and meeting people, combat is a many terrible thing!  The story makes world sense.  The mechanics work as well as they can.  The execution is absolutely fantastic.  As a GM, I enjoyed this mod.  My players did as well.  Just make sure you know what your players want to get.  Hack and slash need not apply!    97%